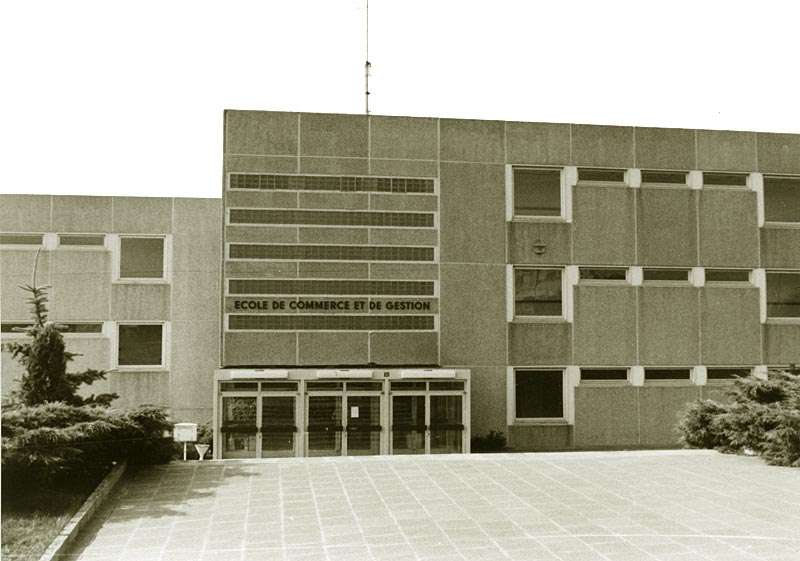 The 1960s, and 1968 in particular, marked education in Luxembourg. The Enseignement Moyenne was created in 1965, and a reform was introduced substituting, amongst others, the former Section Commerciale with the Section D with a focus on economics.

At that same time, companies were declaring their interest in economic and administrative training at various levels, including technical secondary education. Up until that point in time, only vocational training on the one hand, and traditional secondary education had been offered in Luxembourg.

Responding to the requirements of professional life, Minister Jean Dupong set up E.C.G. training in 1970. In September 1970, a handful of young people inaugurated the first class of a new type of education designed to be the logical continuation of the commerce section of the Enseignement Moyen. This was made possible via the Ecole d’Administration et de Commerce, which, a few years later, became the Ecole de Commerce et de Gestion. The aim of this establishment was to train qualified young people ready to meet the requirements of a rapidly changing job market. Due to the foresight of many ministers of state, ministers of national education and especially due to the commitment of many teachers, the Ecole de Commerce et de Gestion has been able to generate great satisfaction and undergo remarkable development.

In 1971 to 1972, the Ecole de Commerce et de Gestion moved from its building in Limpertsberg to a prefabricated building called Schroerbau on the Campus Geesseknäppchen in Hollerich. Initially commissioned on behalf of and intended for the Lycée Michel-Rodange, blocs A and B are accommodating the Ecole de Commerce et de Gestion even today. Construction intending to expand the school by grouping the blocks with the administration offices, the teachers' conference, the computer rooms, the documentation centre and the multipurpose room (salle des fêtes) was started in the early 1980s and completed in 1985/1986.

The Ecole de Commerce et de Gestion institutionalised by the law of 25th April 1974 (Memorial A – No 34 of 7th May 1974) has known eventful times since then. The Law of 21st May 1979 on, firstly, the organization of vocational training and technical secondary education and, secondly, the organization of continuing vocational training is undoubtedly at the origin of these turbulent phases. It was only thanks to the commitment of early school officials and the sympathies of many intellectual forces in the country that the school was able to survive. Today, no one doubts the usefulness of the Ecole de Commerce et de Gestion and the quality of its teaching at both secondary and higher education levels.

Its success is based on well-performing secondary education meeting the demands of the professional world and coping with changes in the economy. Its success has been such that the model of the Ecole de Commerce et de Gestion classes was copied in a lot of other places.

Officials at the Ecole de Commerce et de Gestion, and the first headmaster Mr. Pierre Kayser in particular, understood that it was necessary to react continuously in the interest of the economy of both that of the school and of the students. It was thus necessary to sensitize the Luxembourg public authorities and highlight the necessity to adapt to highly specialised training offered by institutions abroad (Wirtschaftsschule [D], Kaderschule [CH], graduat [B], BTS [F]). Gradually the path was prepared. First of all, a 14th year of studies (bac + 1) was set up and was aimed at graduates from all walks of life, with the primary goal of bringing school closer to business.

In 1989, Mr. Marc Fischbach, Minister of National Education, officially charged the Ecole de Commerce et de Gestion with a prospecting mission aiming at the setting up of a Higher Technician Certificate (BTS).

The year 1990, the 20th anniversary of the Ecole de Commerce et de Gestion., was also the year of consecration. The law of 4th September 1990 reforming technical secondary education and the Formation Professionnelle approved in article 27  that higher level training in technical secondary education lasting for a maximum of two years, operating in full-time or part-time classes, and culminating in the issuing of a higher technician's certificate (BTS) could be organized. The E.C.G. has since become the Lycée Technique Ecole de Commerce et de Gestion. A new adventure had started. 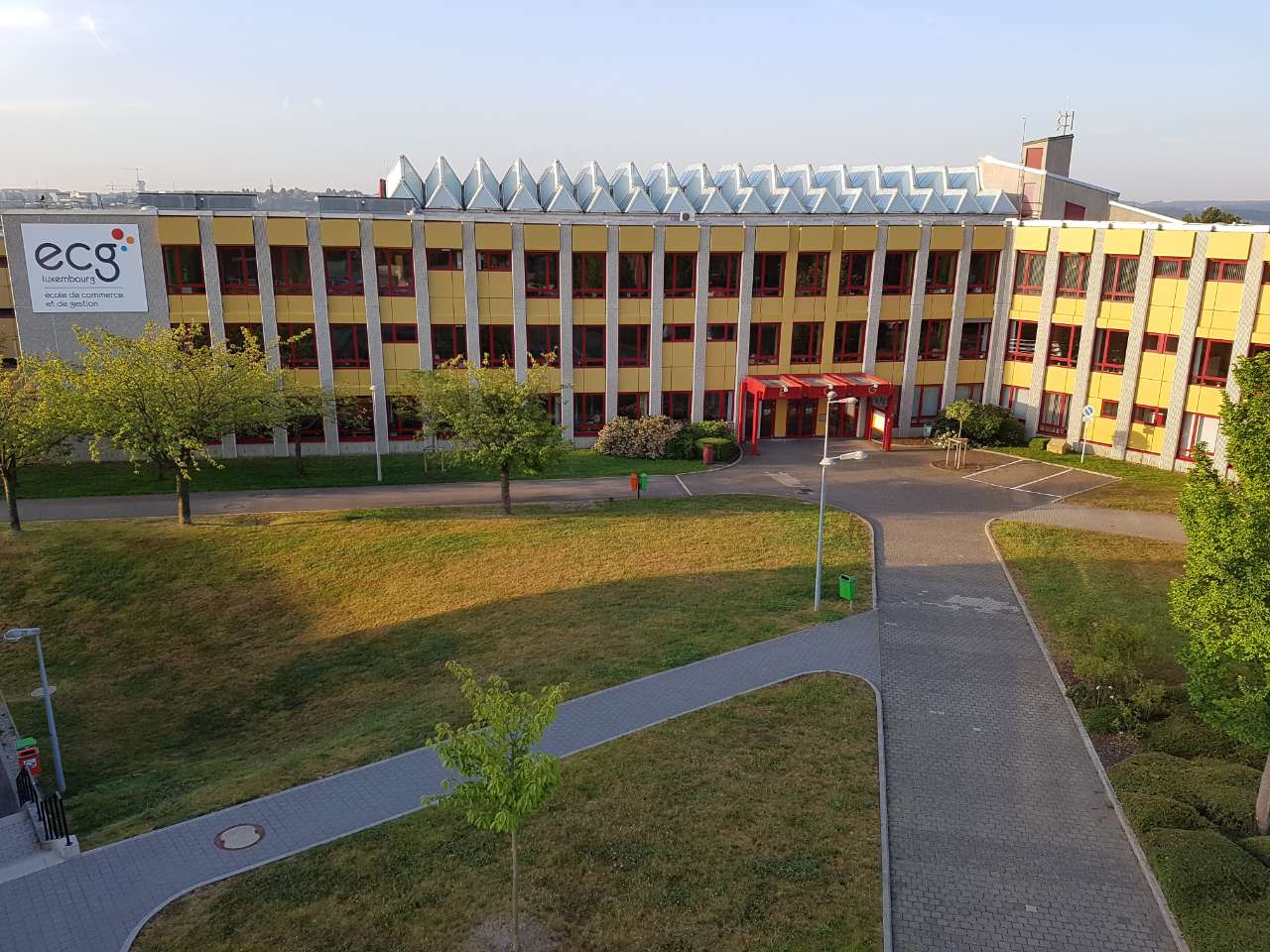 The Grand-Ducal regulation of 25th July 2018 amending the Grand-Ducal regulation of 13th July 1979 allowed granting high schools specific names, at which point the L.T.E.C.G. once again became the Ecole de Commerce et de Gestion and received the added English denomination School of Business and Management. According to the school’s maxim Living the Future Today adopted in 2016, it has always remained faithful to its role and its pilot avant-garde mission resolutely anchored in the vision of the headmaster in office.

Over the last few years, new projects have been launched and specific programs for 4e to 1re levels have been designed. All steps are part of the spirit of a school that envisages to be an “entrepreneurial school” open towards the business world and training young people with high potential in the economic and administrative areas. The Ecole de Commerce et de Gestion has the ambition to consolidate its avant-garde role and to achieve a position of a school of reference in its field in Luxembourg. Steps are undertaken to broaden the school offer by adding new training at the level of classical secondary education, as well as at BTS level. Likewise, a new branch promoting the English language and mathematics, two flagship branches of the economic field, could soon emerge. In addition, may steps were taken to adapt and improve higher education, and once again, the E.C.G. took a leading role in the creation of training at bachelor’s level (BA) in partnership with the University of Luxembourg. Close relationships with universities and colleges in Belgium and France will result in an expansion of similar offers in the years to come.

Teaching at the E.C.G. is facing profound changes both at the level of secondary education (differentiated teaching, group work, makerspace, projects and mini-companies) and higher education (conferences, seminars, studies / research). The outcome of these changes will result in the requirement for the construction of a new building suitable for tackling these new educational demands, while at the same time allowing for potential future developments.